Carnival of the Optimists #18: Back in the game. 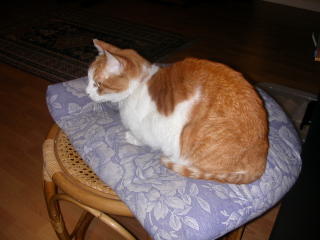 Rudy here is an old cat. As close as we can tell, he's pushing or slightly past 17, and in very good health for his age, minus a recurring gastric problem, but is still, so far as indoor/outdoor cats go, older than dirt.

So when he disappeared unexpectedly at the beginning of the week, suspicion was that he'd gotten sick again and had hauled himself off somewhere to die.

Instead, what we got was his return in a day or so, limping and laying down in an obvious "I hurt I hurt I hurt" marathon of pseudo-sleep. We figured he'd been in a fight, seeing as there was a mark or two on him where he'd clearly bled.

Then later, taking careful stock of the nature and location of his injuries, it became quite apparent, that the old crafty orange-and-white hadn't gotten mauled by the local young tom trying to establish a territory... but had instead had an up-close and personal encounter with the neighborhood's young raccoon. Given that said coon weighs probably twenty pounds and has opposable thumbs, and Rudy weighs eight soaking wet and is now too stiff and slow to bag squirrels every day like he used to, we're impressed.

What we're more impressed by is the fact that after a day of licking his wounds, he's outside looking for some bugs to swat, and will undoubtedly come yowling back to the house in about an hour to tell us all about it. Who says you can't learn from a critter with a brain the size of a walnut?

Welcome, to the Carnival of the Optimists.

Kevin at Technogypsy would like to gloat: Robin Hood is a verb!

Big Picture Guy at Big Picture Small Office gives a taste of how he keeps the faith, in far from the madding crowd. (Somewhere between Good News and Bootstrap)

Harvey at Bad Example really likes a lingerie ad, particularly ones that use typical women, rather than brutally-starved supermodels. Hrm... safe for work, but... unrepentant masculinity warning? How do you phrase that?

Fred Fry International has a problem: he doesn't like buying products from other countries. He knows folks who don't like manufacturing going overseas, too. But unlike those people, he does something about it: going through the effort of checking the label. And no economic-theory debates here, folks: we need more folks who get off their tails and take steps to solve problems, rather than just grousing about it. Kudos, Fred-Fry.

Steve Pavlina has a post up about getting organized. As usual, he ties it to a coherent, simple idea that makes sense...

Just too cool. Yet another buried story about progress that's under the radar, but has theoretical ramificaitons that could change our world... how'd you like to be able to regrow the thymus in adults, and in the process, drop-kick the immune system back into gear? Right now, it has promising applications for those suffering from cancer and AIDS. Later, this alone might significantly boost both lifespans and quality of life for everybody.

And that's certainly worth applauding.

Thanks for reading, folks. Keep 'em coming, and see you next week!
Posted by boxingalcibiades at 5:46 PM

you're actually a good webmaster. The website loading velocity is incredible. It seems that you're
doing any unique trick. Also, The contents are masterpiece.
you have done a magnificent activity in this subject!

Have a look at my homepage: what is car insurance *trilln.com*