Carnival of the Optimists #9: The Water's Fine!

So, what's good this week? On the home front, we've rescued the kittens yet again from a horrible starvey death... wonderful fragile things, stray kittens are...

The Carnival of the Optimists is alive and back onto its regular schedule.

So what's good news this week?

Let's start with Willisms, and Quotational Therapy #18. And why, no matter what political party you are, there are grounds for thinking that maybe Reagan had a clue after all. Great quote. I'd love to have a blog as spiffy as this guy's...

Technogypsy is thrilled at the continuing joys of Dad-hood, which includes plinking at lunch. I think that this kid is definitely not worried about Squirrelly Wrath...

Dubious Profundity shares one of the simple joys in life... in particular, a back porch, and the benefits that come with it...

Only one Bootstrap this week... and it's serious political news.

AtlasShrugs2000 has a roundup of the news concerning Islamic women's struggles to obtain something resembling the rights we take for granted in America... and while it's not all roses, it's still definitely grounds for hope. Several links, all worth reading. Remember, only the pessimist is an idealist: the Optimist stares reality right in the face before saying "I can clean that up..."

And finally, here's Progress for this week. See that cute little sucker? That's a Kemp's Ridley sea turtle.
I call him Pokey. Mostly because, when the park rangers at Padre Island let them all go, Zippy hit the waves like he was born to run, and Pokey... well, he wakes up like I do. Thus, he gets to be a rock star for a half-hour on the beach... 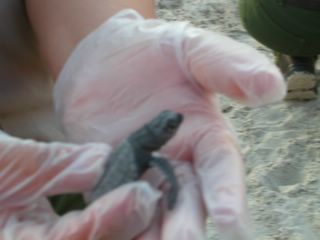 Y'see, a while back, we realized that too many plastic bags was a factor that was doing in the sea turtles. So they raised a bunch of Kemps Ridley's up to maturity, and cut them loose on the beach, figuring that they'd remember this new nesting site and make it their own. Sure enough, the KR Boyz are back up to around 3000 turtles, and so far this year, 43 hatchings have happened... a bit burst over last year's 40 total, and enough, at this rate, to be optimistic about these guys getting off the endangered list. Which is good for warming our hearts -- and eating those jellyfish.

Posted by boxingalcibiades at 4:23 PM

Actually, a small correction; make the 42 nestings. The one we witnessed over the weekend was the first hatching this year.
Just to be uber-precise here...:-)

I agree WILLisms.com is a spiffy blog! I think he can say it and explain it better than I can myself! Plus I like the pictures and graphs!

I give squirrelly wrath about a minute....then pie!

Your oven must be spiffier than mine, I have to bake the suckers for eat least thirty minutes...

Hey, I have to ask. Is there any interest on trading Palinko recipes?