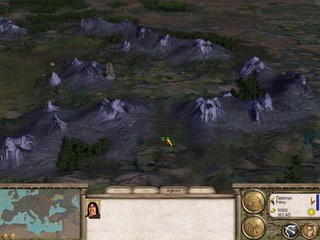 Hrm... I know the Goths are in there somewhere...
Rome: Total War - Barbarian Invasion

My background is somewhat different from that of most game reviewers, so you're not going to get the typical game-summary review (see Gameplanet's somewhat shallow review) or a slew of pretty pictures (for that, see the TotalWar site -- and they ARE nice). I'm a strategy gamer, not particularly hardcore... just on a very casual level, especially compared to the other thing I do for fun and profit... which is medieval military history and experimental archaeology relating to ancient and medieval military technology.

In other words, as a reader, you may disagree with me wildly regarding some typical game mechanics, graphics, etcetera: gustibus non disputando est. When it comes to the game and what it's supposed to represent, though, I'm more than justified in saying that you should give me the benefit of the doubt, because I know what I'm talking about.

Let's see how it goes:

Gameplay
Even though RTW is miles ahead of Medieval Total War on the combat screen and strategic map (which could be a satisfying game in and of itself, with a flavor very similar to the old Warlords games) I stuck with MTW for a long time, for a very simple reason: the opposing AI was a complete pushover. It was worth it to me to play a (heavily modded) variant of MTW in order to have an opponent who would, if I screwed up, hand me my butt on a platter.

Barbarian Invasion fixes that handily. The AI at medium levels is fairly weak: a human player should feel bad if comes back from a computer battle with less than a "Clear Victory." However, the AI will make workmanlike use of its troops, and will hand you your head if you wind up in an untenable situation (it was all that I could do to simply hang on when my pathetically outnumbered heavy cavalry was engaged by a horde of horse archers. Villehardoin's ghost would have snickered.) The AI uses its troop types correctly, and the level of sophistication directly varies with the difficulty set: it is MUCH easier to engage in the standard (and historically correct) "hammer and anvil" cavalry/infantry tactics on medium level than it is when set harder, because the AI will try to intercept your cavalry as it moves into position.

As well, the background music is very well done, and actually does create a sense of drama: a hard-fought battle will actually obtain sufficient feel that it breaches the suspension-of-disbelief barrier, and immerses you in the action.

On the strategic map, the movement of individual units "in turns" rather than moving "by order" still slows down play, however, and the AI makes very poor use of reinforcements/reserves, tending to commit his forces to the forward zone piecemeal, so that they wind up outnumbered. This problem is endemic to the RTW engine, however, and is a fairly small price to pay in order to be able to actually use the terrain to strategic advantage.

I have one copy of this game, so multiplayer is simply not an option and not reviewed here: frankly, I don't miss it, even though an occasional "I'm going to kick your butt" is fun between friends.

Good. I experienced "temporary hang" on the strategic map, but no CTD, and no CPU burps on the battlefield. Irritating, but easily tolerable, since you can grab tea or coffee without worrying about suddenly recovering into the middle of a (sorely neglected) clickfest.

The graphics are simply beautiful, and only somebody who is a) VERY spoiled, or b) working with graphics themselves would have any quibbles. Sometimes something with the "skins" (the graphics overlaying the figures and giving them distinguishable characteristics) would look odd for a second, but I couldn't pin down what, and it never detracted from gameplay. Let's face facts: the game delivers MUCH better graphics than is needed to enjoy a strategy game. You know that a game has arrived graphically when the cut scenes are significantly less impressive than the in-play graphics.

The game is compellingly researched, and good enough that a junior-high school student could easily use the game as an impromptu lesson plan in for learning some of the basics of late Roman history. Some things are not as well spelled out as they could be -- for instance, the Roxolani are presented as a separate faction from the Sarmatians, whereas they were actually one of the various Sarmatian peoples. Also, the Slavs as a faction should appear nowhere in the game, as they don't really appear on the Balkan scene until they are brought down from the Dnieper region as the (horrifically abused) slaves of the Avar Kaganate. The Gepids would have been a much better choice in that respect.

However, other aspects of the research truly shine: the Christian world is wracked by all the right heresies, and the map represents history that the average gamer won't have a clue about, but is nonetheless accurate. For example, "Campus Iazyges" is called that because the Goths kicked the Iazyges, a Sarmatian people, out of that territory and made it their own. If you study classical history, expect to recognize names... and to shudder in your boots when you step up to Sirmium (a major "hard target" of the Roman Empire). There are lots of little examples on that score, and the care it took to include them shows -- and it especially shows when compared to the hack-job that was done on Europe for MTW. The improvement is dramatic, and deserves sincere praise.

Sometimes, though, game research and realism is incorrect for lack of a workable option inside a game. "Berber," for example, is a term that doesn't occur in history until the Arab hegira, when they refer to the various North African peoples as "barbarians" -- it's a historically pejorative nickname, like "Welsh" for the Cymri. But, on the other hand, what are you going to do? You can't call them by the Ameziri, because that's too specific a "berber" people for what is actually being represented, and "north African tribes" just sounds stupid. So you have to strike a balance between things that make your college professor happy, and things that sell a game because people are -- gasp!-- enjoying it.

For example: You can't lay waste to the countryside in order to force an engagement by defensive forces -- this should be one of the major goals for any next developments, so long as it doesn't cause one to be in a position where individual terrain hexes then need to be micromanaged by the player. Burning your opponents' crops and raiding his countryside when he refuses to do anything but sit behind his walls is a Good Thing(tm), because it hits him in the pocketbook where he pays his troops. And it's precisely for that reason that the Roman troops starting the game are divided into the types they are: Rome needed border troops to slow down opponents and keep them from simply burning and devastating everything in sight while the heavier legions went a-marching to catch up to them from a more central location.

How you set that up without turning RTW into a really boring game is beyond lil' ol' me.

But those are the only two quibbles, and quibbles they are, compared to factors such as historically-accurate units that behave correctly and an advisor who will irritate the stew out of you while he tries to bring you up to speed on basic generalship. In other words, the advisor will ask you, in so many words, "are you sure you want to leave your warlord's butt hanging out in the breeze while he's being charged by enemy spearmen?" Because the game will teach you to be a decent armchair tactician, they can make sure that units fight how they should, and rout when they should, without creating a game that is impossibly difficult for a newbie to computer wargaming.

Adding to that are a slew of new game issues, such as the "horde" feature, where naturally transhumant peoples (that's "nomad," boys and girls) can pick up and make tracks for a new homeland if the place they're living now becomes inhospitable. This is good. Extra tactical options such as the schiltrom and shield wall are even better. (Schiltrom is a term from late-medieval Scotland... shades of future projects?)

Even better is the feature of this game that is perhaps most universally overlooked: different factions have different victory conditions, which may or may not intersect, or even conflict. Yes, Virginia, we're no longer having to shoehorn all factions into the same game, or even necessarily the same play style. This is a simple, should-be-obvious realization that is long overdue in the gaming world.

Combine the last two paragraphs, and you have the standing potential to take Barbarian Invasion and take it all the way into the high middle ages, two or three hundred years at a time... and to take it further back in time, if desired. If the developers heeded the player community and left the new game additions soft-coded for the modding community, Barbarian Invasion could wind up being the springboard towards a lasting and enthusiastic fan community.

Rome: Total War - Barbarian Invasion has its rough spots. But they're pretty smooth, as rough spots go, and the game is one of those very few where very young and quite older players can happily co-exist. The gameplay is good, the graphics are great, and the research and historical realism will satisfy the faculty members of your local college.

It's a great game, and I thoroughly recommend it.

Posted by boxingalcibiades at 5:00 PM