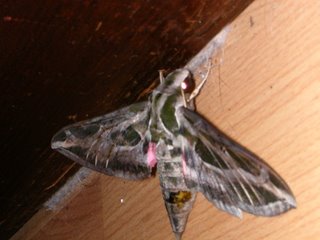 I stepped next door to loan a Petersen's bird guide to the Watercolorist, and BooBoo said "hey, would ya look at that?" (BooBoo's el gato numero dos, so this was in sign language.) 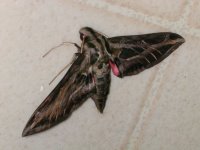 Now, I know, intellectually, that there are some big moths out there in this great big wide world of ours. I also know, that in over fifteen years around Dallas, I ain't never seen one like this. Usually we get the little grey jobs that eat the hell out of your wool. Since I happen to make felt out of exotic and otherwise hard-to-obtain wool, guess who kills pretty much all moths, on sight, 24/7?

Have alien beings masquerading as harmless third-world villagers planted the Moths of Doom in my house, or what? You know, the ones with the cricket legs who are Secretly Causing Global Warming from their Underground Base in Central America? (No, really, that's the plot of an honest-to-God sci-fi flick, and one of the better ones if you don't mind a little camp.) 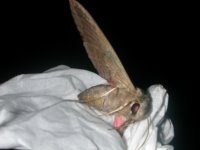 Oh, and... she's a girl. Saw the ovipositor, while she was flapping like mad trying to escape me and BooBoo. Fortunately, she ain't real bright, and "flap" seems to be her cure for all problems.

"Flap" is ineffective against orange oil.

But she didn't give it up without a hell of a fight, so ya gotta hand it to her there. This is "Mrs. Flap," during one of her less intense moments, in my hand.

Yes, that's not a little moth bed I cranked out of nowhere... that's my hand, and the whole picture should be rotated CCW by 90 degrees to understand this sucker's true scale. Looks like the cocktail dress is only pretty from the outside; she's all brownish-grey underneath.

I was sleepy as hell on my way home... now, I think I may as well put on a pot of espresso, just so it's official. I'm not easily creeped out by bugs: I have, in fact, eaten a roach, just to seriously mess with a girl's head (she deserved it). But I'm mildly freaked by critters that aren't supposed to be living where they're living.

Gotta look this sucker up. What the hell is this thing, and how did a two-inch-long moth get the hell inside my house without me noticing?

Posted by boxingalcibiades at 9:08 PM